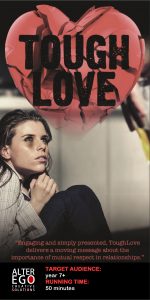 ‘Tough Love’ is our hard-hitting Applied Theatre project that raises awareness around Coercive Control and Domestic Abuse in teenage intimate relationships. The play is followed by an actor facilitated post-show talk exploring the issues raised.

It is an adaptation of AlterEgo’s highly acclaimed ‘Behind Closed Doors’ project – which was originally developed in association with The City of London Police as part of their front-line officer training in response to the HMIC ‘Everyone’s Business’ report and has featured on ITV’s ‘Tonight’ programme.

ToughLove tells the story of 15 year old Becka and her relationship with her violent and controlling boyfriend Danny. How they met, how they fell in love, how the control and violence started and how Becka eventually managed to get help.

The play has been seen by thousands of young people around the UK has proven highly effective at covering:-