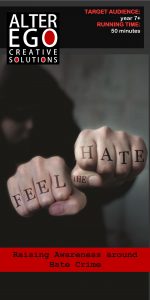 A powerful performance highlighting what Hate Crimes are and what impact they have.

‘Feel the Hate’ was developed out of a growing need to raise awareness amongst young people around Hate Crime.

The 35 minute performance is suitable for young people in year 7 and above and is followed by a 15 minute long post-show talk.

Using simple story-telling techniques ‘Feel the Hate’ tells the stories of four victims of Hate Crime.  Joe was a young man who was questioning his sexuality,  Kim was a young girl with a disability, Sue was a young Muslim girl and Ania was a young girl who’s family were from Eastern Europe.  Each character tells their story, how they were victmised and the impact it had on them, their friends and families.

It was originally commissioned by the office of the Cumbrian Police Crime Commissioner and first toured the county in the early autumn of 2016.  It proved highly effective in:-

Raising awareness amongst young people of:-